To All The Troupes We’ve Loved Before… 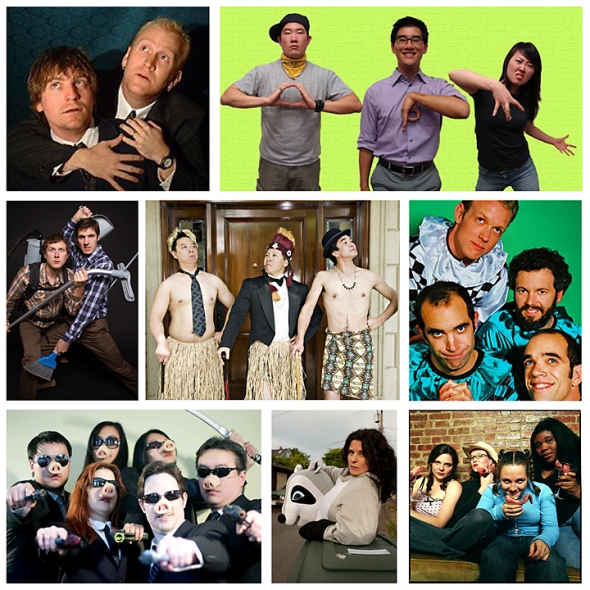 One of the greatest things about being in a sketch comedy troupe is that you get to perform at comedy festivals where you can see a lot of great and inspiring comedy. People that we have had the pleasure of seeing or sharing with the stage with over the past 10 years include the Blackout Broadcast, Bucket, Canadian Content, Charles, the Cory and Doug Show, David C. Jones, the Dead Understudies, Hey You Millionaires, the Kupps, KYHU, Obscene But Not Heard, the Skinny, Ten West and the 30 Cent Players.

Backstage with Doug Morency and Ayumi Iizuka of the Kupps, the epitomes of class and professionalism on and off the stage. They also taught us that ukuleles are hilarious when correctly deployed.

The following are some of the troupes and individuals who have had the biggest influence on us in our development as a comedy troupe. Thank you all for letting us play in the same sandbox as you. (P.S., I have no idea if those are real titles for the individual sketches I have listed but those who have seen them will know what I’m talking about.)

Morgan Brayton. What can we say about Morgan that has not been said (and likely by her). It is not too much of a stretch to say that we owe our continued existence to Morgan. If she had not plucked us from obscurity, like a Hollywood producer discovering a small-town ingénue at the county fair, and programmed us into Vancouver SketchFest in 2005, we likely would not have celebrated our second anniversary, much less our tenth. Over the years she has been a supporter, a mentor, an ally and an incredible friend. And she is also one of the smartest, funniest, fiercest sketch comedians that we know, whether performing solo or as part of a group. She taught us one of the most important lessons that any comedian can learn: that you are ultimately responsible for what you put on stage and how it is perceived. Or, to put it in her more succinct words, “Never write a cheque that your ass can’t cash.” Personal favourite sketches: Any of the “Button Bradley” monologues, “I want a baby!” (from the Crawford Twins with Lauren Martin), “ICE CREAM!”

MEAT (Elizabeth “Biz” Ellis, Reggan Holland, Becky Poole and Livia Scott). I’m not sure if this NYC group is still around but they were arguably the biggest influence on us in terms of content, philosophy and intelligence. An all-women group that never made women the butt of the joke but instead created comedy that was dazzlingly varied in form and content, sometimes sharply political, sometimes surreal and geeky, but always hysterically funny. We met them at Vancouver SketchFest in 2005 where they immediately took us under their wing and made us feel like a real comedy troupe for the first time. Personal favourite sketches: “Dancing Poodles”, “Black Babies” and “Evil British Children.”

Pork Filled Players (Current line-up Brian Beckley, Matt Dela Cruz, Agastya Kohli, Narea Kang, Maggie Lee, May Nguyen, Melissa Slaughter, Roger Tang, Brad Walker,  Owen Yen and Yvette Zaepfel), OPM (Charles Kim, Ewan Chung and others), 18 Mighty Mountain Warriors (Michael Hornbuckle, Greg Watanabe and Peter Wong). I’ve lumped these three groups together not just because they are all Asian American, you racist, but also because they were all instrumental in showing us that you could be respectful and true to your identity but not restricted by it. I remember being asked at a panel discussion if we found being an Asian Canadian comedy troupe “limiting.” The answer is that we find being an Asian Canadian comedy troupe about as limiting as Monty Python found being a troupe of freakishly tall, Oxbridge-educated Englishmen limiting, which is to say, being an Asian Canadian comedy troupe is only limiting if you think being an Asian Canadian is limiting. These three groups are anything but limited and we have been honoured to perform with and be inspired by all three over the past decade. OPM, alas, have hung up their spurs but the PFPs and the Warriors are still going strong. Personal favourite sketches: PFPs “I’m dead”,  OPM “Homeless Chinese woman”, 18MMW “Citizenship test”

The Cody Rivers Show (Andrew Connor and Mike Matthieu). Probably the most inventive comedy troupe we have ever seen, combining elements of theatre, dance, mime, slap-stick, wordplay, time-travel and wrestling, sometimes within a single sketch. No two sketches are alike or even closely related. I once heard someone describe them as what would happen if Robert LePage created sketch comedy. I would disagree only in that Cody Rivers often transcends sketch comedy altogether. Personal favourite sketches: I don’t even know where to begin.

Kasper Hauser (Rob Baedeker, Dan Klein, James Reichmuth and John Reichmuth). Watching them is like entering an alternate universe where you no longer make sense. They are masters of taking a offbeat premise and playing it out to its (il)logical conclusion with complete commitment. And they once did an entire show in clown suits. Personal favourite sketches: “Phone call to the 14th century” “Blaine Cardoza.”

This entry was posted on September 2, 2013 by assaultedfish. It was filed under 10th anniversary, Cool, Plugs, Video and was tagged with 18 mighty mountain warriors, cody rivers show, kasper hauser, MEAT, morgan brayton, OPM, pork filled players, reid along with browning.