The following reviews are the completely subjective (and possibly ill-informed) opinions of the specific writer and do not necessarily reflect the views of the other members of Assaulted Fish. Once again, today’s reviewer is Kuan Foo. 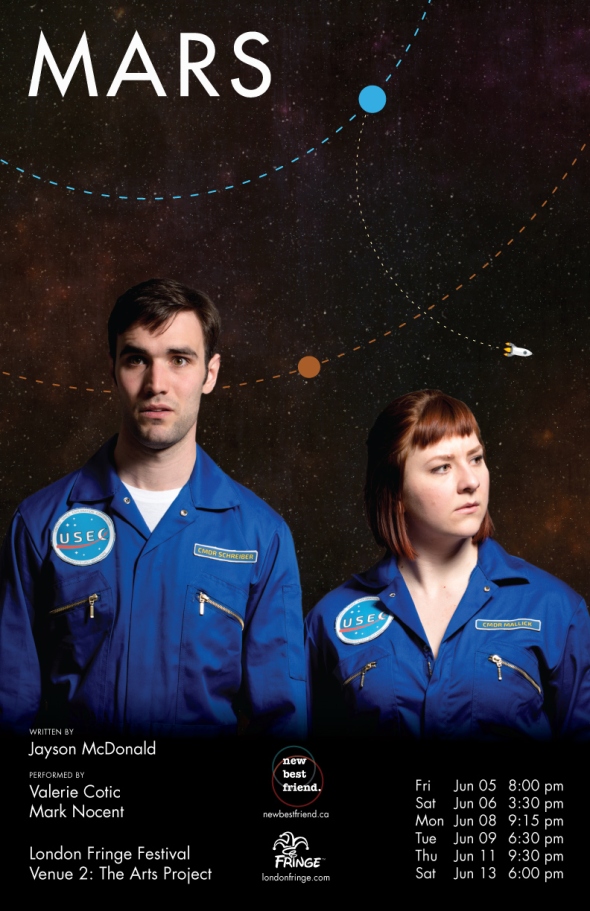 “In space, no one can see you stink-eye…”

Mars – A few years ago, I walked into a show called Giant Invisible Robot not knowing anything about it and experienced one of those fantastic Fringe moments where you immediately want to tell everyone you know to go see the show. Since then I have seen two other shows by Jayson McDonald and been equally blown away by both the easy virtuosity of his performances and his literate, thought-provoking but accessible writing. So I was very curious to see what a Jayson McDonald play would be like without Jayson MacDonald actually in it. Well, the answer is: “pretty darn good!” Like much of McDonald’s other work, what seems at first like a series of high concept comedy sketches (“Temperamentally mismatched Astronauts are trapped together in space” “Chipper father and irritated daughter go on a loooong road trip”), gradually knits together into a coherent narrative of surprising poignancy and power. This, of course, would not work without the deft and truthful performances of Valerie Cotic and Mark Nocent to navigate the tonal twists and turns and to ground this space mission in down-to-earth human emotion. So please, everyone, go and see this show! 4.5/5

Edgar Allan – 11-year-old Edgar Allan (Katie Hartman) is so extravagantly, over-the-top, diabolical that if he could grow a moustache he would likely spend most of his time twirling it. His ambition to be the most outstanding boy at his boarding school appears to be proceeding without a hitch until he runs into his nemesis, also called Edgar Allan (Nick Ryan), a shy classmate who cannot speak above a whisper. (You know how when you have a really flamboyant character and a really deadpan character, how the deadpan character often ends up stealing the show? Well it sort of happens here.) What transpires next is part Gothic horror, part absurdist comedy and part ukulele opera (seriously) that draws from several of the stories of that other famous Edgar Allan. A solid, enjoyable production but not surprisingly will likely appeal most to fans of quirky musicals, Edward Gorey cartoons and, of course, Edgar Allan Poe. 3/5

Nashville Hurricane – One day we may discover that Chase Padgett is a lousy plumber or that he doesn’t know how to convert a 7-10 split. Until that day, we can simply stew in the unfairness that so much talent was placed into one person. I mean, it is apparently not enough that he is a gifted actor with a flair for vocal mimicry, that he can sing like an aging blues man, play guitar like a virtuoso in a variety of styles, and has the comedic timing of … well … a comedian; he also creates fantastic shows that feature all of these aforementioned abilities in their best light. In Nashville Hurricane, as in his previous Fringe hit 6 Guitars, he plays multiple characters: Henry, an introverted, synesthetic guitar prodigy; Henry’s foul-mouthed, irresponsible mother; his charismatic, unscrupulous manager; and a disillusioned, elderly musician who takes Henry under his wing. In lesser hands, some of the characters he inhabits could be caricatures, but Padgett has such an obvious affection for his creations that he never condescends and he manages to find the heart in even the most despicable of them. And did I mention he is a kick-ass guitar player? At some point you just have to surrender to the Nashville Hurricane, let the virtuosity of the performance wash over you and let this force of nature propel you up to your feet in rapturous applause. 5/5

This entry was posted on September 14, 2015 by assaultedfish. It was filed under Reviews and was tagged with Fringe Festival.