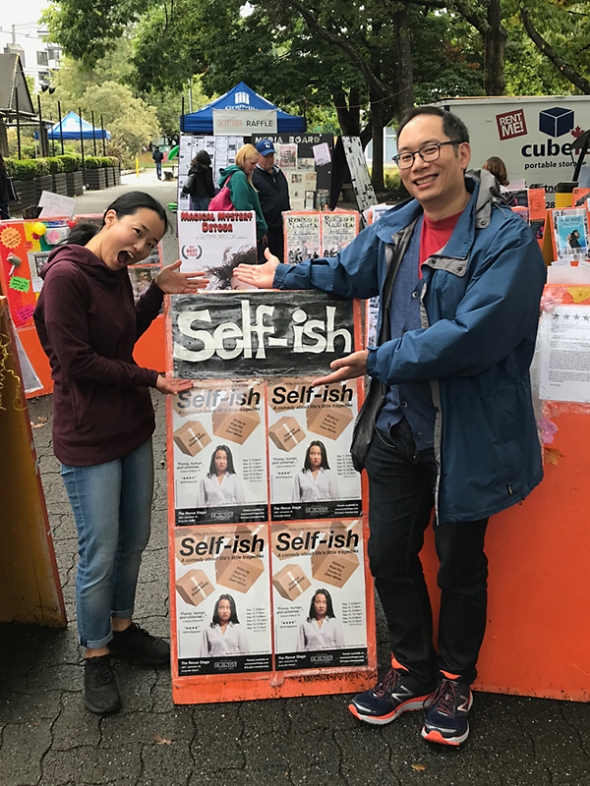 SELF-ish’s run at the 2018 Vancouver Fringe Festival is now officially over and we could not have asked for a better ending than winning a Public Market Pick of the Fringe Award! While we were the ones who got to go up on stage to receive the award, there are many other people who contributed to SELF-ish’s success and we would like to take this opportunity to acknowledge them.

First, a big thank you to our fabulous SELF-ish team: Dawn Milman, our incredible director, whose vision, guidance and dramaturgical skills were instrumental in making SELF-ish what it is; Ashley Vucko, our intrepid stage manager, who kept the show running every night; Pearl Lam, our resourceful publicist whose social media savvy enabled this group of aging Gen-Xers to connect with a whole other generation of potential fans; Dan Jackson, long-time Assaulted Fish friend and photographer, who designed and photographed the striking image you see on the poster.

Thank you to our friends and family who helped spread the word about the play, in particular fellow Assaulted Fish member Marlene Dong who organized large posses from both her current and previous workplaces to come out and see the show. Also thank you to the other artists we met at the Fringe whose work inspired us and who also took the time to see our show.

Thank you to the fabulous Fringe Festival staff and volunteers who do everything necessary to keep a huge independent theatre festival running smoothly and affordably. The artists get all the glory but it is the staff and volunteers who do the majority of the heavy lifting, whether it is organizing and promoting the festival, liaising with the artists, running the box offices, running tech at the venues, or explaining patiently for the umpteenth time that yes, you do have to buy a membership on top of the tickets in order to see the shows. We who have Fringed salute you!

Finally, a huge thank you to everyone who came to see SELF-ish, particularly those who took the time to tweet or Instagram about it afterwards. We love you all (as a group and individually). Without you, SELF-ish would have essentially been Diana shouting into an empty theatre. It has been a fantastic experience for us to be able to show you something a little different than what you have come to expect from Assaulted Fish in the past and we are so glad you came along for the ride!

Holy smokes, the Fringe went by quickly and with a show to promote we didn’t get around to reviewing as many shows as we had hoped. Here’s a few last minute mini-reviews of some things that we saw that are worth checking out if they ever come back:

This show really does not need us to hype it as it won the Volunteer Choice Award, the Georgia Straight Critics’ Pick Award and a Public Market Pick of the Fringe Award as well as being the previous recipient of the Fringe New Play Prize. But you know what? It really is that good. While the play has a definite agenda (as suggested by the title), the execution is so delightful, the performances so effortlessly charming, that you are simply swept along in the beauty of it. My personal favourite show that I saw this year. If you missed it at the Fringe, it will be playing at the Queer Arts Festival in March 2019 — KF

Portland improvisor Stacey Hallal is hilarious as soft-boiled detective Ruby Rocket in this fun noir parody. Hallal and the rest of the cast (a rotating group of some of the best improvisors in town) take some initial suggestions from the audience to create a different mystery each performance. Tying it all together is Ruby Rocket herself with her boozy Chandler-esque asides and flagrant disregard for gun safety. Hilarious and fun (if not always coherent). — KF

Roommates Jeff Leard and Sydney Hayduk have slept together in fit of inebriation and are now dealing with the awkward aftermath, while passive-aggressively playing an online game involving, you guessed it, angels and aliens. Part social satire and part screwball rom-com, Angels & Aliens is held together by tight and witty performances from Leard and Hayduk who navigate the whiplash transitions between the game and real-life with impressive ease. — KF

Hilarious and unsettling in the best possible way. To tell you too much about this show would be to give away its secrets but it will really make you think about how much of our privacy we have given away in the name of convenience. Those who do not like audience participation be forewarned, the cookies are a trap! — KF

This entry was posted on September 23, 2018 by assaultedfish. It was filed under Photo, Reviews, Thank you and was tagged with Fringe Festival, review, Self-ish.