SELF-ish’s run at the 2018 Vancouver Fringe Festival is now officially over and we could not have asked for a better ending than winning a Public Market Pick of the Fringe Award! While we were the ones who got to go up on stage to receive the award, there are many other people who contributed to SELF-ish’s success and we would like to take this opportunity to acknowledge them.

First, a big thank you to our fabulous SELF-ish team: Dawn Milman, our incredible director, whose vision, guidance and dramaturgical skills were instrumental in making SELF-ish what it is; Ashley Vucko, our intrepid stage manager, who kept the show running every night; Pearl Lam, our resourceful publicist whose social media savvy enabled this group of aging Gen-Xers to connect with a whole other generation of potential fans; Dan Jackson, long-time Assaulted Fish friend and photographer, who designed and photographed the striking image you see on the poster.

Thank you to our friends and family who helped spread the word about the play, in particular fellow Assaulted Fish member Marlene Dong who organized large posses from both her current and previous workplaces to come out and see the show. Also thank you to the other artists we met at the Fringe whose work inspired us and who also took the time to see our show.

Thank you to the fabulous Fringe Festival staff and volunteers who do everything necessary to keep a huge independent theatre festival running smoothly and affordably. The artists get all the glory but it is the staff and volunteers who do the majority of the heavy lifting, whether it is organizing and promoting the festival, liaising with the artists, running the box offices, running tech at the venues, or explaining patiently for the umpteenth time that yes, you do have to buy a membership on top of the tickets in order to see the shows. We who have Fringed salute you!

Finally, a huge thank you to everyone who came to see SELF-ish, particularly those who took the time to tweet or Instagram about it afterwards. We love you all (as a group and individually). Without you, SELF-ish would have essentially been Diana shouting into an empty theatre. It has been a fantastic experience for us to be able to show you something a little different than what you have come to expect from Assaulted Fish in the past and we are so glad you came along for the ride!

Holy smokes, the Fringe went by quickly and with a show to promote we didn’t get around to reviewing as many shows as we had hoped. Here’s a few last minute mini-reviews of some things that we saw that are worth checking out if they ever come back:

This show really does not need us to hype it as it won the Volunteer Choice Award, the Georgia Straight Critics’ Pick Award and a Public Market Pick of the Fringe Award as well as being the previous recipient of the Fringe New Play Prize. But you know what? It really is that good. While the play has a definite agenda (as suggested by the title), the execution is so delightful, the performances so effortlessly charming, that you are simply swept along in the beauty of it. My personal favourite show that I saw this year. If you missed it at the Fringe, it will be playing at the Queer Arts Festival in March 2019 — KF

Portland improvisor Stacey Hallal is hilarious as soft-boiled detective Ruby Rocket in this fun noir parody. Hallal and the rest of the cast (a rotating group of some of the best improvisors in town) take some initial suggestions from the audience to create a different mystery each performance. Tying it all together is Ruby Rocket herself with her boozy Chandler-esque asides and flagrant disregard for gun safety. Hilarious and fun (if not always coherent). — KF

Roommates Jeff Leard and Sydney Hayduk have slept together in fit of inebriation and are now dealing with the awkward aftermath, while passive-aggressively playing an online game involving, you guessed it, angels and aliens. Part social satire and part screwball rom-com, Angels & Aliens is held together by tight and witty performances from Leard and Hayduk who navigate the whiplash transitions between the game and real-life with impressive ease. — KF

Hilarious and unsettling in the best possible way. To tell you too much about this show would be to give away its secrets but it will really make you think about how much of our privacy we have given away in the name of convenience. Those who do not like audience participation be forewarned, the cookies are a trap! — KF

Note that the following reviews are the completely subjective opinions of the specific writers and do not necessarily reflect the views of the other members of Assaulted Fish.

If the offstage Martin Dockery were anything like the onstage Martin Dockery, you’d wonder how he could tie his shoes in the morning without entering into a reverie about the history of knot-tying; digressing into a philosophical inquiry as to why we choose to interpose shoe leather between our feet and the earth; creating a hilarious, fantasy world where the shoeless and shoed are engaged in a perpetual war; and somehow relating all of the above to a developmental, life crisis he was having at that moment. In Delirium, Dockery’s hyperactive imagination turns toward the existential in three autobiographical stories – Dockery’s Canadian girlfriend being held up at the border, a chance encounter at the Burning Man festival, and his grandfather’s book about the life-cycle of the Monarch Butterfly – tied together by recurring themes of passion, loss and transience. These serve as the launching pad for a cascade of frequent and frequently hilarious digressions on among other things, the joy of moving sidewalks, a restaurant that serves nothing but strawberry sandwiches, and a passive-aggressive airplane encounter. While Dockery initially draws you in with his charismatic, rapid-fire, floppy-limbed stage persona, it is the times where he slows down his mind and opens his heart that will linger long after the show is over. In those moments, Delirium resonates with the poignancy of a man who has tasted true happiness, but with it, the absolute knowledge of how fragile and evanescent it is.  –– KF

Okay. Let me say right off the top, anything I say about The Lady Show is going to be seriously biased because, quite frankly, I love these ladies. Morgan Brayton has been a friend and a mentor for over a decade and Diana Bang has been my artistic partner-in-crime for fifteen years in the sketch comedy troupe, Assaulted Fish. An excerpt of my own play, Self-ish debuted at a Lady Show last year. I am even wearing a Lady Show hat as I type this. Honestly, I have about as much objectivity as a hockey dad on this one.

For the uninitiated, The Lady Show has been putting on regular shows since 2015 and has been a fantastic vehicle for female comedy practitioners in Vancouver, particularly those who exist outside the mainstream. The current line-up is a collective of four individual comedians (Diana Bang, Morgan Brayton, Fatima Dhowre and Katie-Ellen Humphries) who have very different vibes and styles of comedy. The end result is kind of like one of those old time variety shows, where different acts get to strut their stuff before coming together for the big finish. While all four cast members present material that is decidedly progressive – proudly feminist, multicultural and LGBTQ positive – their approaches and comedic sensibilities are very diverse. The personal and intimate stand-up comedy of Dhowre sits side by side with the character-based, conceptual monologues of Brayton; the sharp, pointedly topical Humphries leads into the surreal, absurdist Bang. And are they funny? God, yes.

So to summarize, I like my comedy diverse, progressive and laugh-until-you-lose-braincells funny. If you do too, chances are you’ll like The Lady Show. –– KF

And in other news…

There are still four more showings of Self-ish, starting today at 5:00 PM. If you haven’t gone, we would love to see you there. If you have gone and liked it, there are still plenty of tickets available so tell your friends!

Here’s what the Georgia Straight had to say about Self-ish. 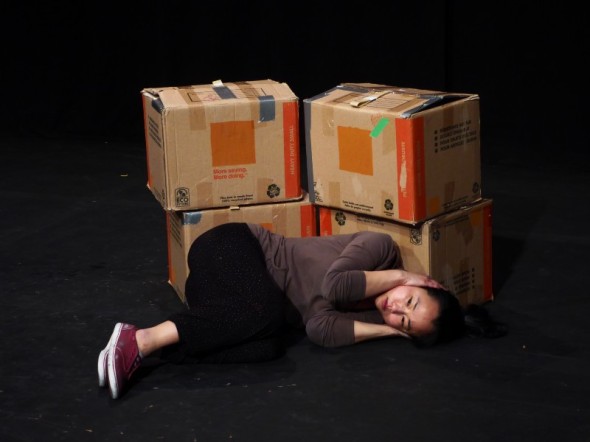 Cold Tea Collective is a new media platform set up by some enterprising Vancouverites to share the stories, perspectives and experiences of North American Asian millennials. At present, they have been hosting written and video stories to their site, but they will be expanding into podcasting. They recently invited a pair of Gen-x’ers (aka Diana and Kuan) to talk about the upcoming production of Self-ish at the Vancouver Fringe Festival.

Kuan Foo: I’ve always been interested in the idea of the self, how we define ourselves, and the things that we draw upon to anchor ourselves as we move through our daily lives. One of the reasons it’s called Self-ish, with the hyphen very deliberate, is when you break that word down, when you think about “self-ish” it sort of means that you’re not quite yourself. And I think when you go into the grieving process or when you’re going through a trauma, or when you’re being selfish, you’re not quite yourself.

Foo and Bang approached the creative project as not only an opportunity to express their own personal experiences with grief, but to also write a multi-dimensional character for a POC actor. Both expressed a need for more complex characters to be played by diverse actors on screen and on stage.

Diana Bang: Kuan pulled a lot from his own life experiences, but he also knew that he was writing for me. I brought the Korean-ness to it, with my mother being Korean, and little details here and there to make it more true to life. But as Kuan said, it’s a universal story. I was trying to bring my whole self to it: My vulnerable side. My flawed self. My selfish self. And my loving self. It was trying to bring my whole person to the character, and that’s what I want to do with acting. In terms of representation, we want to see well-rounded, full, flawed, Asian Canadian characters, whether on TV, on film or on stage. We just want to see someone who’s human.

Once again, the incredible folks at District Local have invited Marlene and Kuan have pick and preview some shows for this year’s Vancouver Fringe Festival. Visit the District Local website for the full article. They’re also staging a contest to win tickets to Self-ish!

Remember to check back here or visit our Facebook page during the festival to read mini-reviews of the shows we’re catching. See you at the Fringe!