The Fishies are returning to the Powell Street Festival for the ninth year running!

Won’t you join us?

Boy, are we excited about our upcoming show with Seattle’s Pork Filled Players! We’ve been hard at work crafting brand new material and we think the results are, well, “Porktacular!”

Directed by Laura McLean, the Fishes’ new show explores existential angst and giant atomic terror beasts. For the watermelon-loving fans of the Queen of Vancouver/Burnaby, she’s baaaack with further tips on how to be sexy on a budget. And in honour of ReAct’s remount of Yellow Face, we present a fresh take on David Henry Hwang’s seminal 1980 play, F.O.B.

For those of you who can’t make the trek south, join us at the Powell Street Festival! We’ll be making our ninth appearance with a free, 30-minute show at this awesome annual community celebration. More details to come as soon as they’re available! 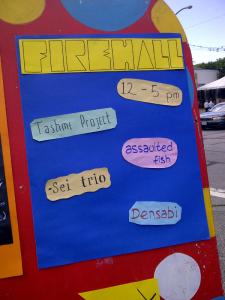 Thanks to everyone for coming out to our Powell Street Festival show on July 31. You were an amazing audience! We hope to entertain you again in the very near future. Btw, anyone interested in a slightly bruised watermelon?

Please check back for upcoming show details, as well as new videos and blog posts. In the meantime, check out these two great shows from our talented friends.

About the Show:
One party. Four perspectives. Do you know the whole story? Experience a house party you will never forget, through the eyes of four pivotal party guests. Mingle, eat and drink, following one of these characters through the house each night. Come for one show or all four to get the whole story.

Party This Weekend is an original, interactive theatre experience presented by The House Party Collective, in association with Scarlet Satin Productions. 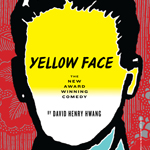 About the Show:
ReAct Theatre and the Pork Filled Players (with sponsorship by the Furuta Lee Foundation) proudly present the Northwest premiere of Yellow Face, the Pulitzer-finalist and Obie-award winning comic “mockumentary” about mistaken racial identity by David Henry Hwang. Casting himself as the protagonist, Hwang recounts his (maybe true, maybe not) hard-hitting attempts to protest yellow face casting in Miss Saigon on Broadway — and his own accidental casting of a white man as Asian. Mixing real events, real headlines and real people with fictional characters and dramatic license, Yellow Face explores and pokes fun at the role of race in modern American society, media, politics and theatre.